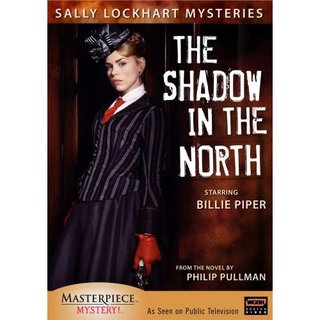 title: The Shadow in the North

based on: “The Sally Lockhart Mysteries”

I was predisposed to enjoy this because I liked Billie Piper as Rose in “Doctor Who” and one of the supporting actors (playing Jim) is Matt Smith, who is to be Doctor # 11. This is a nice opportunity to have them both in the same production. They do, indeed, do nice enough work, though the script is quite weak for Smith’s character. I have also already seen the first film in this series: “The Ruby in the Smoke” That one was ok—reminded me rather of Dickens’s “The Mystery of Edwin Drood,” having an strong set-up and a weak finish (yes, I am aware that Dickens never finished the manuscript, but other authors have), along with a very obvious villain. However, I liked Sally, Jim, and Fredrick enough to keep watching and to look forward to the next one. I actually looked up the novels, but my library didn’t have them.

As for “The Shadow in the North,” it gains points for having a less obvious plot and a more complex group of supporting characters (Alistair MacKinnon & Axel Bellmann, particularly) than its predecessor. Unfortunately, Sally and the other main characters suffer for it—they don’t, frankly, get much to do. Poor Fredrick is reduced to appearing in a variety of unconvincing disguises and then (spoiler music, la la la la la) being killed just as he was getting interesting. The plot moves from clear realism through to the super-natural, though I would have liked to have the final “ghost” scenes better supported. They seem to appear out of nowhere.

(ok, personal rant here, nothing to do personally with Pullman’s work, but I HATE when authors kill off the romantic partners of their strong female characters just as they were about to be happy together. Why?? Why fall back on the idea that happily married/ affianced characters can’t be interesting? Why not let them be together & then work in the relationship’s ups and downs into the story. Diane Mott Davidson has done a lovely job of that. So, why make your main character broken and fragile, especially when the main thrust of the story is not her romantic entanglement, but actually the mysteries or adventures? Edna Buchanan, Patricia Cornwall, Philip Pullman… take note and stop it, already!)

Right, back on track (pun intended)—the idea of the deadly train engine was unusual and chilling, and the final set piece with Sally, when you don’t know what she is planning, is well done.

Overall: worth the watch, but mostly for Piper’s and Smith’s fans.

For more, see below:

by the way: the PBS website mentions that David Tennant will be the new host of Masterpiece Contemporary beginning in October.  Hooray!

books i've borrowed or been given